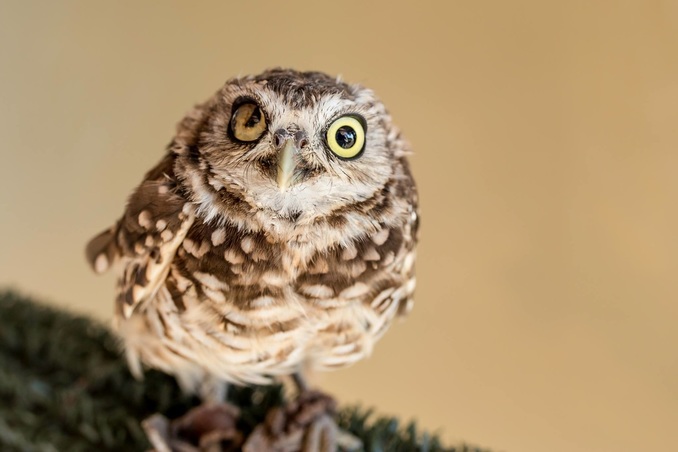 Burrowing Owl (Athene cunicularia) Owls are unmistakable birds, and that goes double for a long-legged owl that hunts on the ground during the day. Burrowing Owls are small, sandy colored owls with bright-yellow eyes. They live underground in burrows they’ve dug themselves or taken over from a prairie dog, ground squirrel, or tortoise. They live in grasslands, deserts, and other open habitats, where they hunt mainly insects and rodents. Their numbers have declined sharply with human alteration of their habitat and the decline of prairie dogs and ground squirrels.

Digger came from Great Basin Wildlife Rescue Center in Mapleton, Utah.  He was found in the roadway and had been hit by a car.  Digger had a pin surgically placed in his wing.  When it was removed, he could no longer fully expend his wing to fly.  He also is blind in his right eye.  Digger is under one year of age.

Habitat - Burrowing Owls live in open, treeless areas with low, sparse vegetation, usually on gently sloping terrain. The owls can be found in grasslands, deserts, and steppe environments; on golf courses, pastures, agricultural fields, airport medians, and road embankments; in cemeteries and urban vacant lots. They are often associated with high densities of burrowing mammals such as prairie dogs, ground squirrels, and tortoises. Breeding pairs stay near a dedicated nesting burrow, while wintering owls may move around and may roost in tufts of vegetation rather than in burrows.

Nesting - The nest burrow can be several yards long and is usually less than 3 feet deep. Burrows tend to make numerous twists and turns, with a mound of dirt at the entrance and an opening at least 4–6 inches wide. The owls often line their burrow with livestock manure, sometimes with feathers, grass, or other materials. When owls dig their own burrows, the process takes about 10 days. Nesting owls tend to use areas with a high density of surrounding burrows, which may provide extra escape options for developing young. Preferred sites have loose soil, a bit of elevation to avoid flooding, and nearby lookouts such as dirt mounds, bushes, fence posts, or road signs. They use burrows dug by prairie dogs, ground squirrels, badgers, marmots, skunks, armadillos, kangaroo rats, and tortoises.

Behavior - Burrowing Owls hunt at all hours of the day and night. Usually staying close to the ground, they fly, hover, walk, or run, seizing prey in their talons. Between forays for food, they sleep on dirt mounds at their burrow entrances or on depressions in the ground. Disturbed owls bob jerkily up and down, as do hunting owls pinpointing prey. They are mostly monogamous and breed close together in loose colonies. Females stay in or near the nest burrow until chicks fledge, while males tend to stand guard at a nearby burrow or perch. Males defend their territories against other males by vocalizing, displaying in a weaving crouch with feathers fluffed, or chasing and attacking with outstretched talons. Courting adults—mainly males—display by circling overhead or flying dozens of feet into the air, hovering for a few seconds and then rapidly descending. Pairs vocalize, rub bills, and preen, the male calling and presenting food to the female. Young owls play-hunt by jumping on each other, on prey brought by their parents, and on dung around the burrow.

Most Common Problems - Collision with vehicles. Other common injuries include poisoning from rodenticides, gunshot wounds, electrocution from contact with powerlines, entangling in wire.