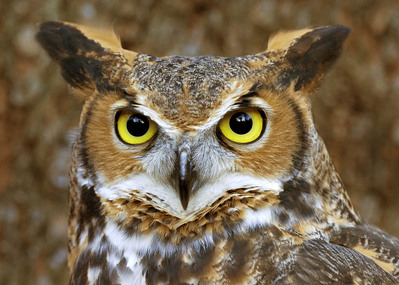 Great Horned Owl (Bubo virginianus) This owl is named for its most distinctive feature -- large, wide-set ear tufts or 'horns' that give its head a cat-like shape. Females are larger than males, and the sexes look alike. The head is large, with feathering across the forehead that shades the yellow eyes into a fierce expression. The body is broad and bulky, the tail is short, and the talons are large and very strong. The wingspan of this owl is comparable to the wingspan of a large hawk. The largest of North American owls with ear tufts, and one of the largest owls on the continent, this owl is a fierce-looking predator. This owl is swift and graceful in flight, moving with stiff, steady wing beats, with wings held mostly below horizontal; flight speeds up to 40 mph have been recorded.

Beau was found  down and emaciated at a lake in Jacksboro, TX.  He was temporarily blinded by a direct blast of spray in the face from a skunk .  Great Horned Owls are the only bird of prey that will eat a skunk.  He had been on the ground for almost 2 weeks and came into rehab at 65% of his normal body weight.  Organ failure begins when a bird hits 70% of normal body weight.  The vision recovered but he was not able to move his right foot. After re-examination by our vet, it was determined his foot had been mauled by the skunk. The foot was filled with infection.  After months of soaking and antibiotics, Beau was not able to regain the use of that foot.    He is permitted to Lila Arnold who holds both state and federal permits to possess for educational purposes.

Habitat - Has the widest range of habitat and climate variations of any North American owl; adaptable to habitat change. Lives in forests, open country, woodlots, riparian areas, deserts, city parks. May often be spotted roosting in the daytime, usually in a tall tree, close to the trunk.

Diet - Prefers rats and mice, but will eat a large variety of prey - mammals from the size of shrews to porcupines, birds, reptiles, amphibians, and insects. Primarily semi-nocturnal to nocturnal, but will also hunt in the daytime. Hunts from a high perch, making a short flight to capture prey once it's been detected.

Nesting - This owl nests in trees, on cliffs, in caves, and sometimes on the ground. Will use abandoned hawk nests if these are available or, since it nests earlier in the season than hawks over most of its range, it will simply appropriate an attractive nest.

Most Common Problems - Collision with vehicles. Other common injuries include poisoning from rodenticides, gunshot wounds, electrocution from contact with powerlines, entangling in wire