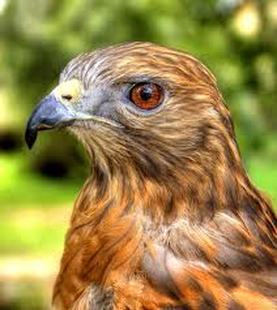 Red-shouldered Hawk (Buteo lineatus) A medium sized buteo (soaring) hawk, the red-shouldered hawk is noticeably smaller than the more common red-tailed hawk. With strikingly barred black and white tail and wings, and chestnut chest and back, this hawk is relatively easy to identify. The tail is proportionately a bit longer, and the wings more rounded than the typical buteo profile.

Sully came to Wild Bird Rescue in the summer of 2011 as a nestling.  He had fallen from a tree during a violent thunderstorm.  Unfortunately his eye was pierced by a branch on the way down and permanently damaged. He completely lost that eye after six weeks under the care of our vet.  He is permitted to Lila Arnold who holds both state and federal permits to possess for educational purposes.

Habitat - Though a buteo, or soaring hawk, which are most often found in open grassland habitats, this species inhabits a broad range of North American forests. They prefer large areas of older mixed deciduous/conifer woodlands, especially bottomland hardwood, riparian woodlands, and flooded deciduous swamps. The western subspecies is most often found in riparian and oak woodlands, but can be found in eucalyptus groves and even suburban areas with nearby small woodlots.

Diet - Has a broad diet, although small mammals (especially chipmunks, mice, voles), frogs, and snakes comprise the bulk of its diet in most areas. Birds, crayfish and insects are key in certain areas and times of the year. These birds launch most of their hunting attacks from a perch, rather than a soar, due to their typical woodland habitat.

Call - Can be very loud, especially as an alarm call, or as a territorial call at the beginning of breeding system - a long, drawn out Kee-aah, with the accent on the second syllable, often repeated in rising notes.

Nesting - Uses many species of deciduous trees (occasionally in conifers), below the canopy but at least half way up the tree in a crotch of the main trunk. Nests in conifers are usually built against the main trunk where a group of branches meet the trunk. Often nesting near water, nest is built or repaired by both sexes, using dead and live twigs and adding fresh green springs of evergreen. Also often contain dried leaves, bark strips, moss and licens. Inner cavity lined with finer shreds of bark and other material at egg-laying. Average of 4 eggs, 33 day incubation; both sexes incubate though most is done by females.