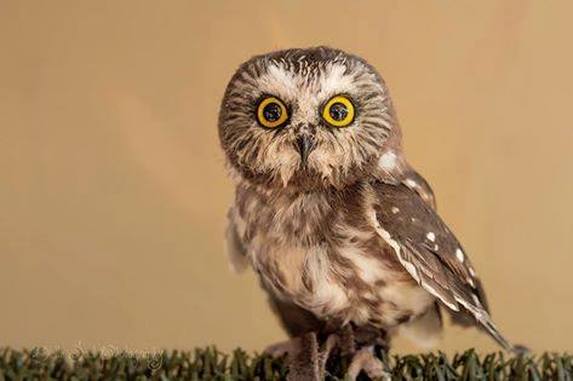 Northern Saw-Whet Owl (Aegolius acadicus) A tiny owl with a catlike face, oversized head, and bright yellow eyes, the Northern Saw-whet Owl is practically bursting with attitude. Where mice and other small mammals are concerned this fierce, silent owl is anything but cute. One of the most common owls in forests across northern North America (and across the U.S. in winter), saw-whets are highly nocturnal and seldom seen. Their high-pitched too-too-too call is a common evening sound in evergreen mountain forests from January through May.

Sawyer came from Great Basin Wildlife Rescue Center in Mapleton, Utah.  He was found in the roadway and had been hit by a car.  Sawyer had a pin surgically placed in his wing.  When it was removed, he could no longer fully expend his wing to fly.

Habitat - Northern Saw-whet Owls breed in forests across southern Canada and the northern and western United States, extending through central Mexico. They seem to prefer mature forest with an open understory for foraging, deciduous trees for nesting, dense conifers for roosting, and riverside habitat nearby. But they nest in a wide range of wooded habitats, including coniferous swamps, disturbed deciduous woods, savannahs, riverside forest, and shrub-steppe habitat. They also nest in boxes placed in coastal scrub, sand dune meadows, and poplar plantations. Saw-whets winter in dense forest throughout the breeding range and across most of the United States, excluding the southernmost edges.

Nesting - Saw-whets lay their eggs on debris at the bottom of the cavity—such as woodchips, twigs, moss, grass, hair, small mammal bones, or old starling nests—without adding new material to the nest. Nest holes may be 8–44 feet off the ground, and they measure about 3 inches wide and 9–18 inches deep, with an entrance hole 2–3 inches across.

Most Common Problems - Collision with vehicles. Other common injuries include poisoning from rodenticides, gunshot wounds, electrocution from contact with powerlines, entangling in wire.