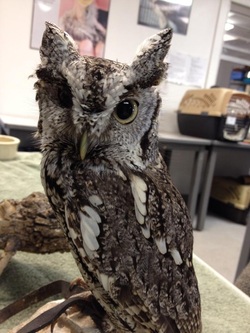 The Eastern Screech Owl (Megascops asio) is a small owl that is relatively common in Eastern North America from Mexico to Canada.  This species is native to most wooded environments of its distribution and, more so than any other owl in its range, has adapted well to man made development, although it frequently avoids detection due to its strictly nocturnal habits.

Adults range from 16 to 25 cm (6.3 to 9.8 in) in length and weigh 121–244 g (4.3–8.6 oz).  The wingspan can range from 46 to 61 cm (18 to 24 in). They have either rusty or dark gray intricately patterned plumage with streaking on the underparts.  They have a large round head with prominent ear tufts, yellow eyes and a yellowish bill, which measures on average 1.45 cm (0.57 in) in length. The feet are relatively large and powerful compared to more southern screech owls and are typically feathered down to the toes, although the southernmost populations only have remnant bristles rather than full feathering on the legs and feet.

Odin, our gray morph Eastern Screech Owl, was found in the road.  A family had drive over thinking he was crumpled trash in the road. The driver looked back in the mirror only to see the "trash" move.  The family brought the bird into us for rescue but not before the young daughter cared for him all night.  Odin eventually lost his right eye due to head trauma.  He was named after the Norse god, Odin, who gave up an eye for wisdom. 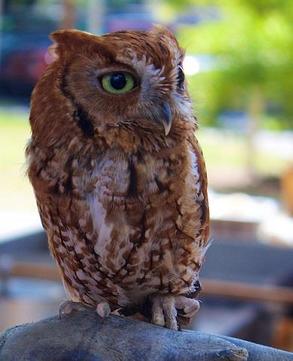 Rebel is a red morph Eastern Screech Owl.  He was found in the roadway so he was most likely hit by a car.  Rebel has a bad tear in the pupil of his left eye which keeps the pupil fully dilated and unresponsive to light leaving him blind in that eye.  His name, Rebel, fits his fiery red nature.