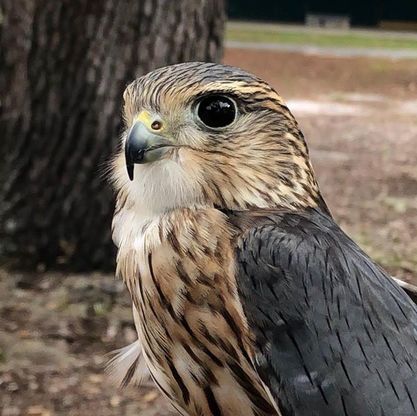 Merlins are small, fierce falcons that use surprise attacks to bring down small songbirds and shorebirds. They are powerful fliers, but you can tell them from larger falcons by their rapid wingbeats and overall dark tones. Medieval falconers called them “lady hawks,” and noblewomen used them to hunt Sky Larks. Merlin populations have largely recovered from twentieth-century declines, thanks to a ban on the pesticide DDT and their ability to adapt to life around towns and cities.

Merlins eat mostly birds, typically catching them in midair during high-speed attacks. They often specialize on hunting a couple of the most abundant species around; prey are generally small to medium-sized birds in the 1–2 ounce range. Common prey include Horned Lark, House Sparrow, Bohemian Waxwing, Dickcissel, Least Sandpiper, Dunlin, and other shorebirds. They don’t stoop on birds the way Peregrine Falcons do; instead they attack at high speed, horizontally or even from below, chasing the prey upwards until they tire. Other prey include large insects such as dragonflies, bats caught at cave openings, nestling birds, and small mammals. Merlin pairs have been seen teaming up to hunt large flocks of waxwings: one Merlin flushes the flock by attacking from below; the other comes in moments later to take advantage of the confusion. ​

The Merlin is a strong and maneuverable flier. A typical flight speed is 30 miles per hour, and can be faster during chases. Despite their small size, Merlins look powerful in flight; they flap their wings faster than Prairie or Peregrine falcons. During the breeding season they are highly territorial around the nest, chasing away other Merlins and potential predators. Merlins are monogamous during a breeding season, but 80 percent find new mates from year to year. When courting, Merlins (particularly males) perform spectacular flight displays, including bursts of strong, level flight while rocking side to side in the air; deep U-shaped dives; and slow, fluttering flights in a circle or figure-eight near to a perched mate. Both sexes claim their territory by soaring high in the air near their nest. Males also make a slow landing next to their mate, keeping their legs outstretched, bowing the head, and fanning the tail; he may bring food for the female. Outside of the breeding season, Merlins are usually solitary. However, they sometimes migrate in loose groups, roost communally, or spend the winter in pairs. Adults may be preyed on by Peregrine Falcons, Great Horned Owls, Cooper’s Hawks, and Red-tailed Hawks.
​